Microsoft recently released an update to Dynamics 365 to merge records asynchronously. What does this mean, and how can it affect you? 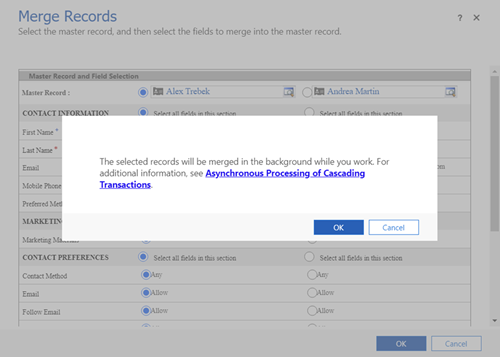 When you merge the records, the changes aren’t applied immediately. Instead, a new background system job will start to do the work.

When you merge two records, associated records (such as the activities, opportunities etc.) get updated to refer to the new master record. If you have a lot of related records, this can take a long time, which isn’t great for the user experience.

Although the merging process could take some time, it was clear to the user that it had finished and everything had been updated. Now, with the processing being done in the background, that clarity has gone.

Once the Merge Records screen has closed, both records still appear in the “Active Contacts” or similar view. You need to refresh the list a few seconds later to see one of the records disappear.

If you now go into that master record, you may see more related records appear over the next few minutes as they are moved over from the subordinate record.

Of course, you can monitor the progress from the system job as described in the documentation, but this is not easily accessible to your average user.

In the worst case, the job fails and the records aren’t merged at all. Currently this is the case if you try to merge records with different parents (e.g. contacts in different accounts). Previously you would have been shown a warning when you click OK in the Merge Records screen to check if this is OK, but that no longer happens. Instead, the system job fails with the error

These records may not be suitable for merging, because they do not share the same parent. If you continue, the subordinate record's relationship to its parent will be lost. To continue, click OK.

Of course, at this point there is nowhere to click OK, so as it stands it is impossible to merge records with different parents. 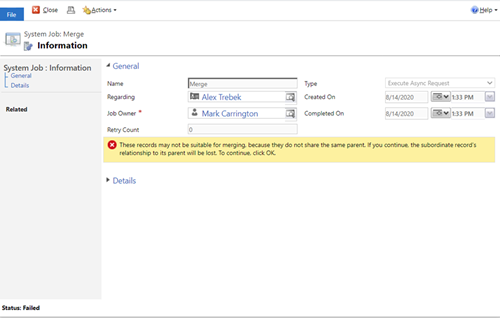 Duplicare currently continues to use the standard D365 merging functionality and merging is performed synchronously as normal. When you use duplicare to merge your records, all the work is done while the merge screen and progress bar is visible so your users know immediately when the merging is complete or if it encounters an error.

With duplicare you'll also be able to merge as many records as you want at a time, not just the standard two, as well as merging records of other types including custom entities.

If you are affected by this change to the D365 merging experience and would like a demo of duplicare to see how we can help, please get in touch.

Register below to start a free trial of our services